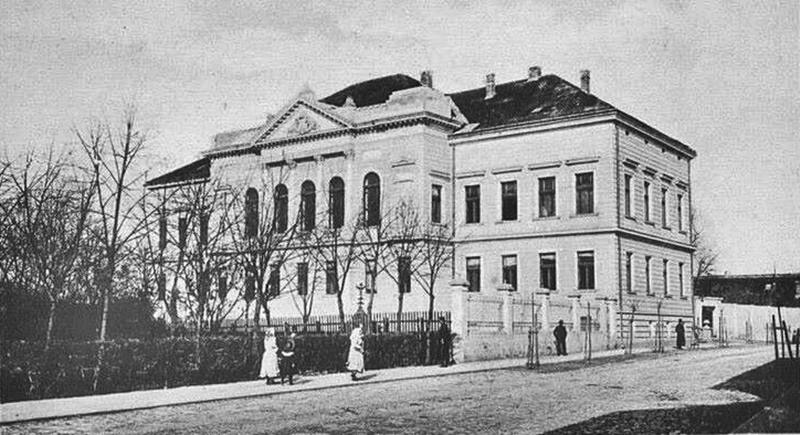 After the final expulsion of Turks from Srem. Mitrovica came, under the provisions of the Peace Treaty of Pozarevac in 1718. under the Austrian rule. Until the year 1745, it formed a part of estates of the counts Coloredo and Pejačevic and afterwards it belonged to the Military Confines of Srem...

...as the seat of the headquarters of the regiment of Petrovaradin and of the brigade of Srem and for some time also as a free commune of the Military Confines or community. Its Serbian population was formed for the most part of immigrants from Serbia an Bosnia and the Catholic population consisted of Croats from the surroundings of Dubica an of Germans from various parts of the German Empire, in the first place from the province of Hesse.

When it had been proclaimed community of Confines, in 1765, it opened the doors still wider for immigrants, particularly artisans and tradespeople (Aromuns!); therefore its population was constantly increasing and its economy, chiefly the trade, in permanent progress. As a matter of fact, a part of Mitrovica remained even at that time under the direct military jurisdiction of the headquarters of the company of the regiment and did not differ, as regards its rights and duties, from the rural settlements in the Confines. The economic development of the town and the forming of the middle class were slackened after 1787, owing to the suppression of the community and the civil municipal administration, which the citizens did not succeed in restoring in spite of many petitions addressed to the Court and material sacrifices they were prepared to make; the military administration was maintained, though its relation to the holders of »civil rights« (for the most part members of the trading and craft classes) has become later more tolerant, for such an attitude was indispensable for the development of the economy of the town and of the Military Confines. On account of its geographical situation, Mitrovica played an important role in the trade between Austria on one side and Serbia and Bosnia on the other, in which its citizens took an active part. Their export to Serbia and Bosnia was rather small in comparison with the exportation from these two provinces, and it consisted chiefly of the products of different crafts and, to some extent, also of industrial products, wine and clothes. With regard the imports it was always large, particularly, the imports of pigs and timber; on this importation were based such solid business firms as those of Bajic. Adamovic, Georgijevic and others. This trade was particularly important in the period First Serbian Insurrection; the main actor in this trade was Dimitrije Puljevic who supplied the insurgents with weapons, ammunition and victuals and exported from Serbia large amounts of pigs. In addition, the merchants rented large properties, butcher's shops and inns both in the town and in its surroundings. In the town there was a lively shop keeping and there was also an important trade with cereals, particularly with Croatia across the Sava and the Kupa.

Mitrovica entered the period of the revolution in 1848 – 49 as one of the largest agglomerations in Srem (over 5,000 inhabitants) and it played a particularly important part in it. The first claims of citizens and of the inhabitants of Military Confines were rather moderate and aiming at an alliance with Croatia, but they gradually become more radical and turned more and more towards the center of the Serbian movement in Vojvodina, at Karlovci.

After the Assembly of May and the attack of imperial and Hungarian armies directed at Karlovci, the movement of Serbians from Mitrovica reached its climax: the citizens and inhabitants of the Military Confines created their district committee and the national guard refused to obey the former military bureaucratic authorities and after that, towards the middle of July, in an open fight, with the use of guns, expelled the headquarters of the regiment of Petrovaradin and dispersed its officers devoted to the emperor and to the Hungarian government, who exerted a powerful influence upon the Catholic population of the town and the environments. After that, the Regiment was reorganized on a national basis, and the committees became holders of authority which had to solve many difficult problems imposed by the war, accompanied by the desertions, banditism and lawless conditions which were more marked in Srem than elsewhere in the Serbo-Croatian territory in 1848 – 49. The popular authority was maintained until summer and autumn 1849, when it was abolished and replaced by the ancient military-bureaucratic order, which was a consequence of the general victory the reaction had gained over the revolution in the Middle Danubian area.