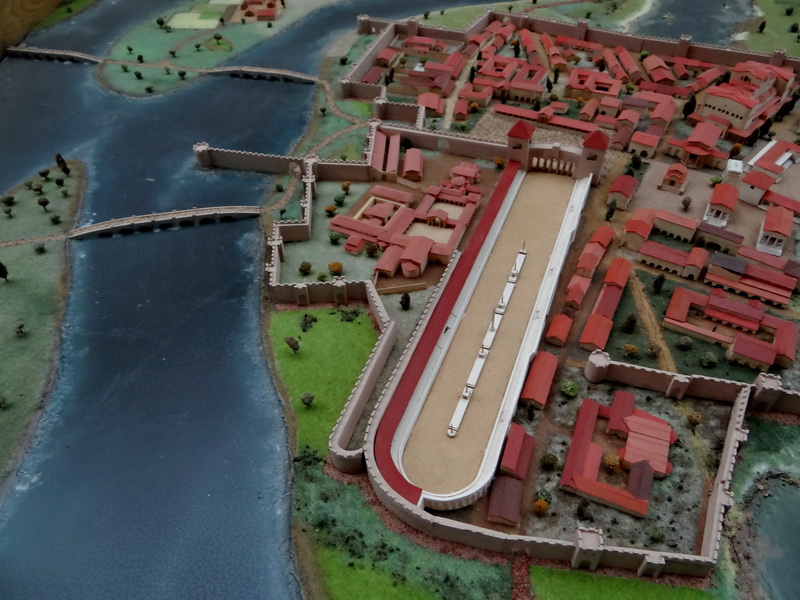 Sirmium entered the history in the course of the last decades of the old era with the arrival of Roman legions, but the founders of the town (civitas) were the Pannonian Amantins and Celts, as inhabitants of the pre historical Sirmium. As a Roman settlement, Sirmium developed very rapidly and in the period of the Flavian dynasty (69 – 96 of our era) the town was granted the status of a colony.

The important military needs at the susceptible Danubian frontier have contributed to the importance of Sirmium where there were frequently seats of headquarters of Roman troops.  Several rulers, such as Traian, Marcus Aurelius, Septimius Severus, Maximinus and Gallienus visited Sirmium. The first rate importance of the town was confirmed by the events the middle of the III century, when the »Illyrian caesars«, born in Sirmium or in its surroundings (Decius Traian, Aurelian, Probus, Maximian Herculius), came to the throne of the Roman empire. The great Diocletian's reform made Sirmium, in 294, one of the capitals of the Empire. In the course of the rapid evolution, the town changed several times its town planning physiognomy and a military fortress in the beginning, Sirmium was transformed into an opulent and luxurious imperial residence, with the institutions accompanying the Roman administrative apparatus as well as the economical, religious and cultural life.

Numerous monuments of Sirmium point out a multinational population, composed of Romanized Illyrians and Celts and of immigrants from Italy, Greece, Gaul, Germany, Syria and Africa. In Sirmium there were large workshops in which weapons, glass, ornaments and metallic dishes and plates were manufactured. The Mint, founded by Constantine the Great, developed an important activity, it struck the famous gold bars with the figure of Fortuna, patron goddess of the town of Sirmium. The archaeological excavations brought to light the rests of the great Imperial palace, emperor Licinius's thermae, municipal granary, fragments of monumental town walls and dozen of other edifices and constructive details which corroborated the words of the ancient historian Amianus, Marcellinus, who qualified Sirmium as »glorious and populous Mother of towns."

The text was taken from the monograph SREMSKA MITROVICA, published in 1969 by the Museum of Srem.
Photos are mine, except those for which it is indicated  (*from the WEB site of Museum of Srem; **Photos of Carole Raddato from flicker)

Click on a photo to see a larger version

*A Roman wall square-shaped brick with Greek inscription, two wavy parallel lines in the middle and one semi-circle below them. In the upper left corner in front of the inscription there is a christogram; inscription ih Greek and states: Christ, Lord! Help the town and rebuff the Avars and keep Romania and the one who wrote this, Amen. On the back of the brick there are residues of mortar. This monument is a remarkable document of the siege of Syrmium by the Avar Kagan Bayan.